This week my Friday Favorite is a lesser known absolute favorite of mine, it's Love with the Proper Stranger.  starring Natalie Wood and Steve McQueen.  I love, love, love! this movie.  It was released by Paramount Pictures in 1963 and was directed by Robert Mulligan, who directed, To Kill a Mockingbird the previous year and has a generally impressive filmography. 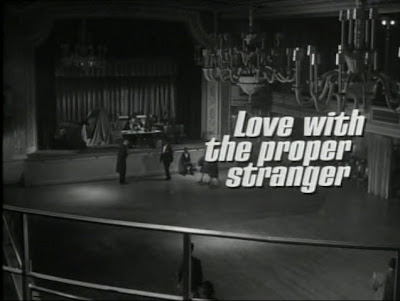 I first saw this movie in 2009 and remember being shocked and appalled that it was not readily available on DVD.  I cannot remember what prompted me to watch it or seek it out, but I must've heard that it starred Natalie Wood and Steve McQueen and decided that it must be mine!  I searched the internet high and low and came across a copy.  I watched it and loved it. About a year or so later it aired on TCM, so I made my own recording, complete with an introduction by Robert Osborne.  It seems to air just about every 2 or 3 years on TCM, I recommend checking it out if you see it in the schedule.  I was also very pleasantly surprised to find that it is now available to rent or purchase as a streaming video through Amazon.  That was not the case 4 years ago.  I may or may not have purchased it, in the name of research and due diligence for this post and if I can figure out how to use the Amazon widget/shopper thing I'll be sure to hook you up with a link or something at the bottom of the post.
This movie stars Natalie Wood as Angie Rossini as a young Macy*s salesgirl who feels stifled and trapped by her family and what's expected of her as a girl/woman in society and she's looking for anything else, a way out.  She has what can only be assumed was a one night stand with an often out of work musician, Rocky Papassano played with heart and the perfect amount of nonchalant coolness by Steve McQueen.  After discovering that she's pregnant from their encounter Angie goes to Rocky to ask for a name of a doctor (if you know what I mean).  I'll admit this could be a controversial subject matter for a film, but it's handled in such a delicate and classy way by everyone involved in the movie.  The movie doesn't push an agenda or deliver anything in a heavy handed manner.  It's just presented as is, and is more of a plot device than anything.  Along with the budding relationship between the two leads Angie's family is pushing her to date a family friend, Anthony 'Clumsy' Columbo (played by Tom Bosley in his first role).  And Rocky is living with a dancer named Barbie played by Edie Adams.  It is a very well acted and engaging film. 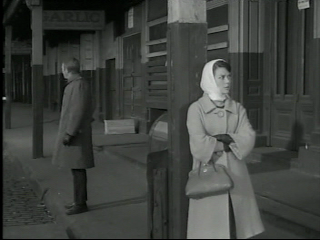 What I think is particularly interesting about this movie is that we never see Angie and Rocky together that night, or see what their rendezvous really entailed.  Instead it's as though we pick up in the middle of the story, which feels more realistic and almost voyeuristic on the part of the viewer.  As Angie and Rocky navigate this situation that they're in, you get a sense of what that night might have been like and you also see their feelings for one another grow. 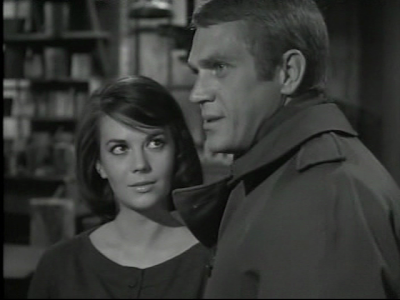 Favorite Scene/Witty Exchange: Rocky comes to visit Angie at her new apartment, he knocks on the door, she opens it 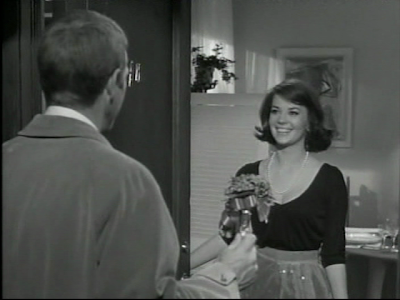 Angie: Hi! come on in!
Rocky: Hi, man do you look wild.
Angie: Thank you.
Rocky: Oh, no, I mean it, I really mean it.
Angie: Look how surprised he sounds.
Rocky: You look so, what am I gonna tell you?  You look like a woman.
Angie: How can you manage to make even a compliment sound like a slap in the face?
Rocky: What did I say you look like woman, I apologize excuse me you look like a man.
Angie: You wanna fight all day?
Rocky: Who's fighting? I don't want to fight.
Angie: Alright then, sit down, I'll make you a drink.
Rocky: I don't know what it is, first time in my life I come to see a girl I feel like I'm 14 years old, you know even when I was 14 I didn't feel like that. 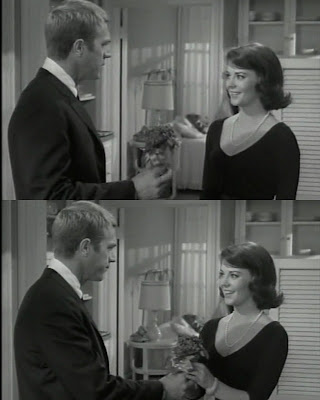 Rocky hands Angie the flowers he's been holding
Angie: They're beautiful, thank you.
Angie looks for a glass to put the flowers in 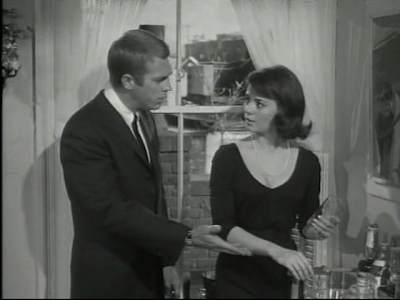 Angie: What would you like to drink?
Rocky: Uh, scotch? I don't know what do you got?
Angie: Um, scotch, gin, bourbon, vodka.
Rocky: What are you on the sauce now? I thought you didn't drink.
Angie: I don't.
Rocky: What are you running here, the USO?
Angie: Would you like a drink?
Rocky: Thank you.
Angie: Scotch?
Rocky: Thank you.
Angie: Water, soda or tonic?
Rocky: Aha, scotch and tonic?  Ah very good.   Zelda, gin and tonic, yes. vodka and tonic, yes, scotch and tonic, no. 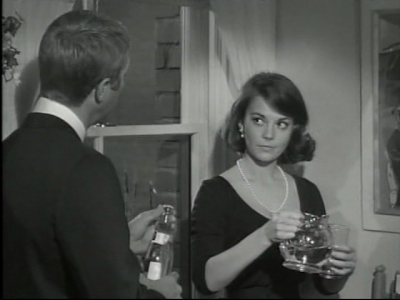 She pauses, looks quizzically at him
Rocky: Water.
Angie: Thank you.
Rocky: You gotta know these things if you're going to run a respectable den of inequity.
Angie: Well I'll learn in my own little way.

This whole scene is filled with little quips and arguments and results in Rocky putting the moves on Angie, how could a girl refuse?  I can see how they got into the mess they were in. 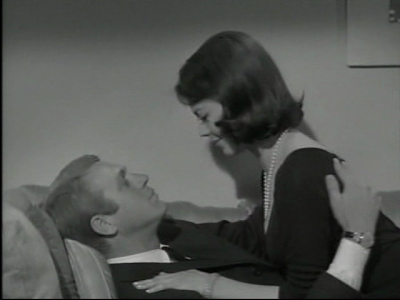 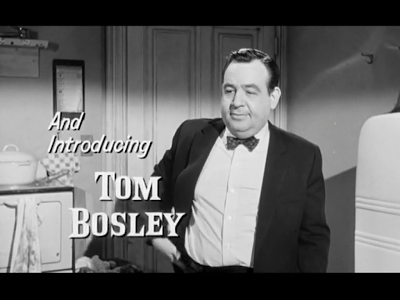 Tom Bosley plays the very sweet, but bumbling would-be suitor to Angie.  He gets VERY clumsy and very nervous around Angie.  He breaks dishes, bumps into tables, spills coffee, really earns the nickname Clumsy.  But he's very sweet and kind to Angie.  Even if he can barely get a full sentence out when speaking to Angie. 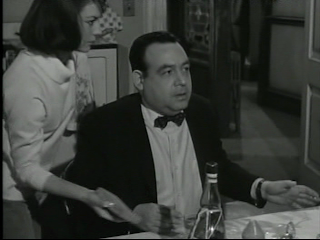 There's a very cute scene where Angie has dinner at his place with his mother and 2 sisters.  It's a great film introduction for Tom Bosley who would later be a very well known TV star on Happy Days. 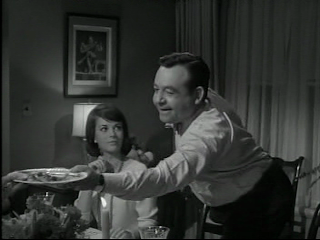 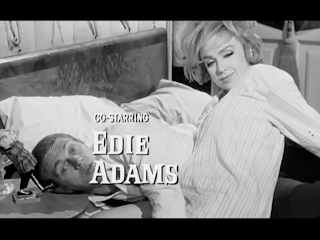 It was brought to my attention by Robert Osborne during his introduction of the movie that Natalie Wood was nominated for her third Academy Award for this movie and I think she was extraordinary in the role and certainly deserved the nomination.  It makes sense that she was nominated, since she makes this role hers.  She plays all the different emotions of this girl becoming a woman who has to make difficult decisions and makes her very, very real. 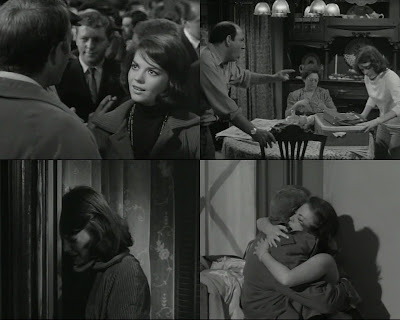 But, I can't help but wonder why Steve McQueen wasn't nominated, I feel like it wasn't a typical role for him, he took on the leading man role quite nicely and expressed a wide range of emotions.  According to the outro by Robert Osborne, the director really wanted Paul Newman for the role of Rocky, but Steve McQueen really wanted the role and lobbied for it intensely.  I think he was a good choice and allowed him to showcase his acting chops by tackling a complex, diverse role like this.

While watching this film again and trying to take screenshots to represent all the beauty that is this film I noticed that the cinematography is exquisite; every shot, every frame was so well done and composed.  So I wasn't too surprised to discover that the cinematography was also recognized by the Academy; it was nominated for Best Cinematography for a Black and White Film.
I ended up taking very many screen shots and had a hard time narrowing it down for the post.  It may also have something to do with the fact that both Steve McQueen and Natalie Wood are just too freaking cute for words.  Here are some other screencaps that I just thought were lovely. 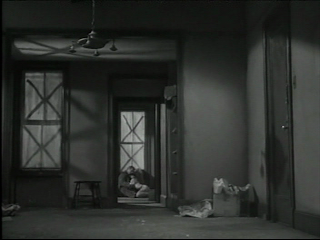 I thought this was particularly powerful and plays into the idea of being a voyeur, watching these 2 people on their journey. 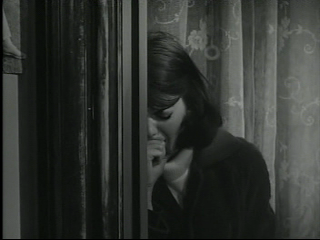 Here's an example of the great job by Natalie Wood, she does so much by doing so little.  You really feel her pain. 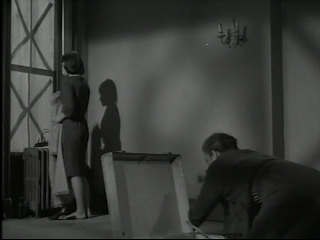 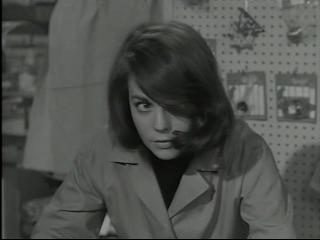 I also thought Natalie's hair was super cute in this movie, it would drive me nuts to have to keep moving the peek a boo/sweeping bang out of my face constantly, but she made it work.  It almost became a character choice she played with her hair in different ways depending on how she was feeling.  I also think head scarfs need to come back, picture evidence: 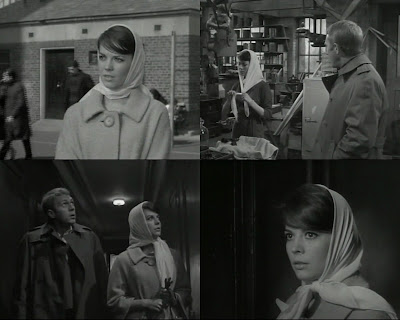 It's also worth noting that in addition to the Best Actress and Best Cinematography nominations the movie was also nominated in the Best Art Direction-Set Direction for a Black and White Film and Costume Design for Black and White Film (Costume Designs by Edith Head!) Categories, as well as Best Writing, Story and Screenplay- Written Directly for the Screen for Screenwriter Arnold Schulman.  I still don't understand how this movie isn't more well known or readily available, one of life's mysteries. 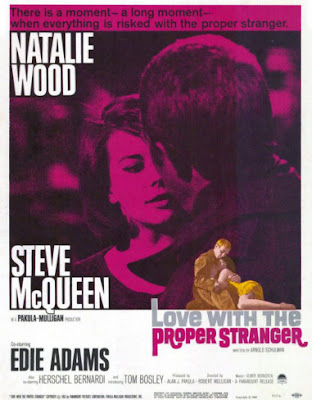 I ordered this fabulous poster from Allposters, framed it, but can't decide where to put it in my apartment.

Alright, that just about wraps up this edition of Friday Favorite.  I really hope this post piqued your interest in this sweet, slightly controversial and unfortunately little known film.  If you're a fan of Natalie Wood and/or Steve McQueen I definitely recommend it and as a fan of film in general I think it's worth a watch.  Oddly enough there's a trailer for it from Paramount on YouTube, even though they haven't released it VHS or DVD, so I will leave you with that:


I figured out the widget! woo!

Diane
I'm a huge! classic movie fan (hence the blog). I am currently teaching, but kind of thinking about a career in entertainment again.